What Everyone Ought to Know About Employment and Aspies

The focus of this blog is to increase understanding of Asperger’s Syndrome, to provide solutions, and in doing so, increase hope for individuals on the autism spectrum.

I recently came across a three part series of articles from author Gavin Bollard, who writes for his blog called Living With Aspergers.  I contacted him and got his kind permission to reprint his three articles titled, “Improving Employment Prospects for Aspies.”  It’s truly an honor to be able to print his articles here.  This is the first article, and it’s bound to create some great discussion around this topic.  I look forward to hearing your comments. 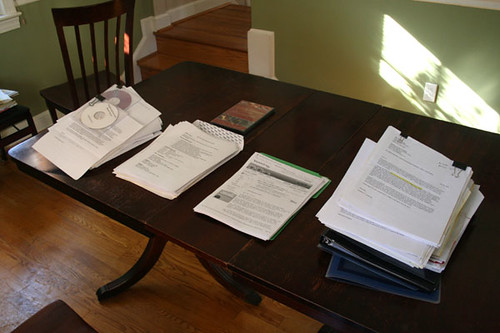 photo credit: giant stack of resumes by woodleywonderworks on Flickr

This article appeared on the Columbus Dispatch last Monday and I’ve been pondering its deeper meanings since then. It highlights an important problem and is well worth a read.

by Rita Price.
The article raises important points which I think are worth discussing but it also uses some language, terminology and concepts that I’m not overly fond of. In some ways, it leads the reader to believe that while aspies are generally quite smart, their social issues get in the way so much that it becomes a “favour” when an employer gives them a job.
Employers already have enough power over their employees without us making out that it’s a privilege to even be considered for a job. It’s not a privilege. It’s a right. An equal opportunity right.
In this series, I want to look at the aspie employment issue and suggest some ways it could be improved.
An Imbalance of Services

There are plenty of Aspergers Services for early intervention but not much for after-school assistance.

To be honest, I don’t think this is a problem that is confined to Aspergers Syndrome. I think that this is also often the case for the better known disabilities such as blindness, deafness and downs syndrome. People are always much more willing to provide support for children than they are for adults. It’s mainly a cute-factor thing but there’s also a sense that adults can fend for themselves.
The problem is that many adults on the spectrum really can’t fend for themselves. Sure, they sometimes seem very capable but the problem is that academic and social capability are entirely separate things.
It seems silly to think that someone who holds a masters degree in language or communication may actually be unable to communicate socially but it happens. The same goes for people who hold excessive qualifications in business studies but are fazed by simple forms – that’s right, it’s not just a social issue. Then there are sound engineers with aspergers who have sound tolerance issues. It’s true, I’ve chatted with some.
“We weren’t Ready!”

The other thing that the aforementioned article says is that society just wasn’t ready for the influx of individuals with Aspergers;
“This wave of what used to be preschoolers with autism is moving on, and we’re really scrambling to meet that need.”

This is all based on the idea that Aspergers and Autism in general are on the rise. It seems to suggest that there was an “aspie boom” about 15 years ago similar to the post-war baby boom and that suddenly a whole bunch of autistic children appeared.
It’s not a theory I subscribe to.
It’s my belief that autism rates have risen due to a number of factors, mostly increased tolerance and changes in the nature of our society. Children who, in the past, would have been institutionalised at an early age now live full and healthy lives. Aspie adults can now (sometimes) find appropriate work or government support. Either way, the aspie generation now has a much better chance of passing their genes onto their offspring. It’s clear that there are a lot more “carriers” around today but that in itself doesn’t account for the “aspie boom”.
I think that the other factor is simply recognition.
Have you ever bought something that you thought was fairly unique and taken it out of the shop only to start noticing that other people already seem to have your “unique” item. I believe that label of aspergers is similar.
Once you have a word for the condition, you start to notice more and more people who fit the description. Their numbers aren’t necessarily increasing, it’s just that we’re now much more perceptive about their condition.
My point being… not being ready isn’t really a good excuse.

Both the aspie and the employer tasks deserve exploratory posts of their own, so I’ll be exploring them in more detail in my next posts.
P.S. from Steve Borgman.  You may also enjoy this article I wrote on my Psychology Today blog, called How To Find Your Career on the Autism Spectrum.
There are also a couple of books I highly recommend.  The first author, Rudy Simone, has experience as a jazz singer, graphic artist, author, and professor.  Her book is called

Asperger’s on the Job: Must-have Advice for People with Asperger’s or High Functioning Autism, and their Employers, Educators, and Advocates

The next book I recommend is by Temple Grandin, PhD, titled Developing Talents: Careers For Individuals With Asperger Syndrome And High-functioning Autism- Updated, Expanded Edition