There’s no question that every child is a child we are proud of just as s/he is.  Every single person on planet earth is worthy of intense parental pride.  But there are also breakthrough moments every child goes through that makes their teacher, parent, caregiver beam with pride.

One very capable, generous, and innovative caregiver I have met through Twitter is Ms. Sara Winter, known on Twitter as @sarawinter.  Sara is a mother of two, and she also helps as an aide to her nephew, a 10 year old boy with autism.  She is also the founder and developer of Squag, ” a customized application for tweenagers on the autism spectrum to connect with each other.  I hope you will stop by Squag.Com for more information!

Sara gave me permission to reprint an article from her blog about the process of helping her nephew navigate some very challenging hurdles of relating to other children at recess.  I hope you will enjoy it and learn from it: I know I did! 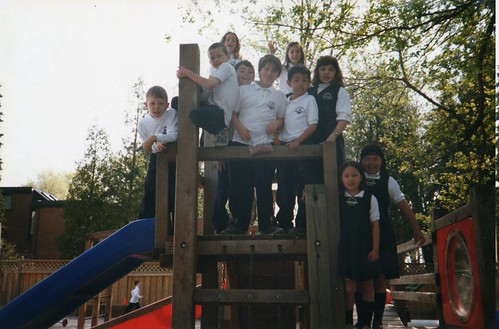 By Sara Winter
For years, recess was a nightmare for my nephew. Vast open space and unstructured time; the glare of the sun bouncing off the snow; groups of rowdy kids yelling and screaming and playing random sports in undefined space; arguing over subjective rules at lightening speed.

So much to process bell to bell.

As my nephew’s aide, I knew that he needed his time and space to decompress and be on his own, but as his aunt, it was tough for me to watch him pace around the perimeter of the playground alone. His physiology spoke for him: low muscle tone, no eye contact; distant, hazy voice. His system was not turned on.  How could I get him to engage, and get the feedback from his body he so badly needed?

In the old days, when he was little, I would facilitate.  I had bags of tricks to entice other kids into playing with us. I was a bit like a circus clown; my nephew never cared much for it.

From his dad came the interest in basketball, but my nephew only had competency with one aspect of it: shooting.

And he was good at it!  He practiced over and over.  He challenged himself (he’s competitive) and quantified it.  He set records for himself, and smashed every one of them.  We started calling him “All Star” so he had a name to encode and spark the memory of his accomplishments.

Soon, he brought his new confidence out for recess. But this was not “playing basketball” to the other kids, so when he tried to play the way he knew how to, he failed every time. He had no global understanding of the rules nor could he follow what the other kids were doing quickly enough to respond.

We worked at it piece by piece.  His dad went over the rules while they watched NBA games on T.V.  I did what I could to facilitate fair teams, or ask other kids to buddy up with him to watch his back. But my nephew was starting to show me that he wanted no involvement from me.

He wanted to be left alone with his friends.

But how?  How could I do that when I could see that he was struggling?

Lots of crying.  Lots of falling apart. Lying down on the ground and screaming.  Yikes.

The kids looked to me to fix the problem.  My nephew and I were caught in a vicious loop where I repaired or overcompensated to try and help him to be successful.

Me trying to control the situation was making things worse.

Enter Lisa Palasti, our gifted RDI consultant. She came to school from time to time to watch my nephew at school and help me gain some objectivity. She recognized this roadblock as an opportunity for my nephew to gain the independence he so badly needed.

She told me it was time to fade back; that we had done as much as we could to support the situation, and now we were going to continue to do so behind the scenes.  She encouraged me to trust that he had known this group of kids for many years, so in a way, it was the safest place to do it.  This required me to be out of sight, and let him fall apart and require it of himself and his friends to pick up the pieces.

I was horrified.  Let him cry?  Let him scream?  Really?

The outcome was amazing.  After working incrementally for just short of eighteen months, he went from spending all three recesses alone, to finding his ground on three different areas of the field.

He went from “only batting” in baseball to playing every position.  From “only shooting” by himself on the basketball court to collaborating with kids on making their own fair basketball teams.  In fact, he became a leader wherever he could, because this is his natural tendency ☺.

He came to find out that he was good at handball, and kids started to ask him to be on their teams.  This led to many other “pick-up games” with little more (in terms of a framework) than the typical playground grunts and body language that kids use to set up rules to made up games.

This experience showed me that this kid is capable of anything when he’s surrounded by people who respect him and give him the opportunity to be independent.

My favorite thing, to this day, is when he brushes by me in the hall, face flushed from a recess played hard.

His big blue eyes shine up at me.  I want to tell him how proud I am of him, that he’s my hero; that he’s the strongest person I know.  I pause, and think: best not to embarrass him.

Instead, I step back, so he can take a well-earned sip from the water fountain.

Sara Winter is a mom of two boys and the founder of Squag.com

Note from Stephen Borgman:  If you are interested in reading more about Relationship Development Intervention, here are some resources you may find helpful:

RDI Connect is the main website for Relationship Development Intervention.

What have been some of your child’s challenges?  How involved have you been in working to intervene?  What were the results?  Your thoughts are welcomed!  Please comment on this article, or subscribe to my blog for more articles on solutions for the autism spectrum.